The popularity of The Rogers Group coincided with that of the parlor stereopticon, a regular source of entertainment during the Victorian period. A stereopticon is a slide projector that combines two images to create a three-dimensional effect, and appears to make two images dissolve into one. Between 1867 and 1876 many sets of stereoviews of John Rogers statuary were issued by at least 17 different companies. In total, about 41 different groups were represented, so it is possible to find many views of the same title, each from a different view or perspective unique to the particular company issuing the stereoview.

Shown below is a sampling of stereoviews issued by some of these companies. 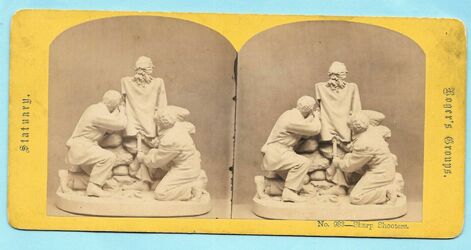