The magic lantern is an early type of image projector that used pictures—paintings, prints, or photographs—on transparent plates (usually made of glass), one or more lenses, and a light source. It was mostly developed in the 17th century and commonly used for entertainment purposes. The magic lantern was in wide use from the 18th century until the mid-20th century when it was superseded by a compact version that could hold many 35 mm photographic slides: the slide projector.

The magic lantern used a concave mirror in back of a light source to direct the light through a small rectangular sheet of glass—a "lantern slide" that bore the image—and onward into a lens at the front of the apparatus. The lens adjusted to focus the plane of the slide at the distance of the projection screen, which could be simply a white wall, and it therefore formed an enlarged image of the slide on the screen.

During the Rogers Group era, a number of magic lantern slide companies produced a series of slides portraying the Rogers Sculptures. For example, in his 1890 catalog of slides Thomas Hall listed no less than fifty of the groups, including every group Rogers had published from 1861 to 1882, except five titles. Some slides were simple, with the two pieces of glass held together by black paper glued to the outside four boarders. Others were more elaborate, encased in a wooden slide holder. Still others included multiple statues in one wooden frame.

Shown below are a number of magic lantern slide examples, although this array is not intended to be a complete set. 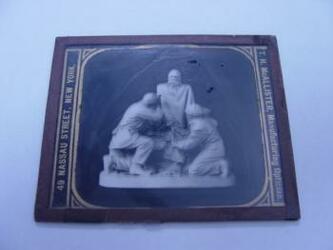